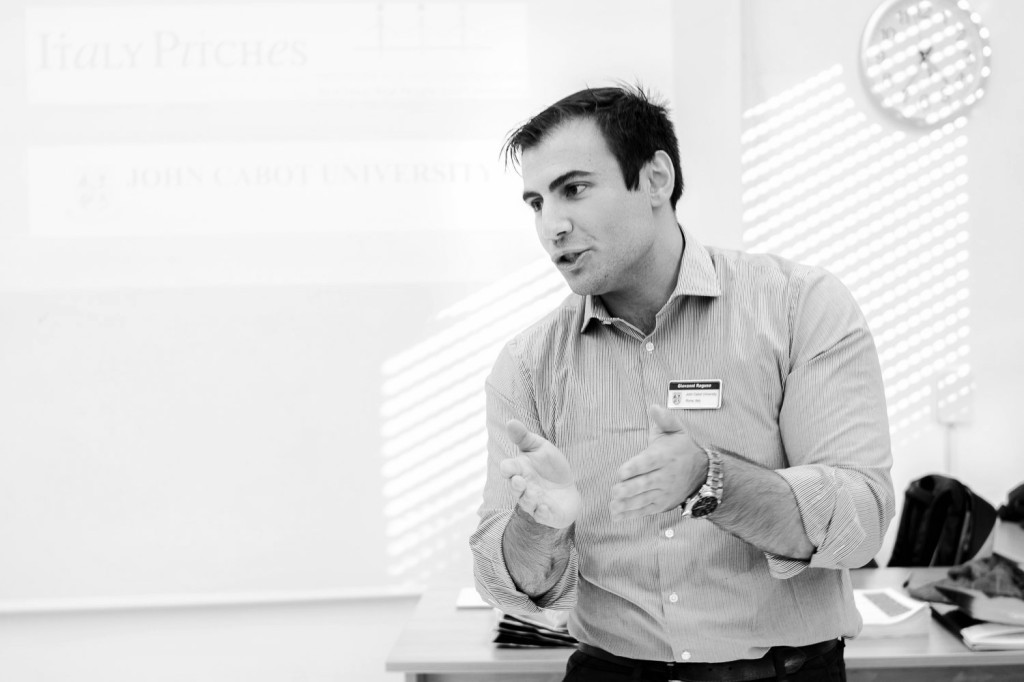 Giovanni Raguso, a recent graduate of JCU Class of 2019, utilizes the skills gained from his undergraduate studies and incorporates them into his current position as a JCU Admissions Counselor.

His participation in several clubs and extra-curricular activities like the SPEAK UP Club, the Theater Society, Basketball Team, and his election as President of the Student Government, to name a few, are all memories that he reflects fondly upon. With his international and language-based up-bringing in his hometown of Palermo, Giovanni always knew that he wanted to study and work in an international setting, reinforcing his decision to double major in international affairs and international business.

Upon graduation, Giovanni was hired as an admissions counselor for the John Cabot Admissions Office. While typically he spent most months traveling to different schools all over the world, from the UAE to South America, to recruit potential JCU students, the onset of the Coronavirus pandemic in March 2019 has altered his job description, placing his travels on hold for now. His position has been “revolutionized” to a virtual venue.

Giovanni, could you start by telling us a little about why you choose these majors?

You were involved in several clubs and extracurriculars at JCU. Can you tell us more about this? Do you have any fun memories?

Yes, I started with the SPEAK UP Club. I’m not sure if it’s still  active now, but the SPEAK UP Club was all about public speaking. I played for the basketball team at JCU, and I was very proud of it.

Actually, there was a funny story, not many people know this: I was also in the Theater Society and we were preparing a musical. It was the Addams Family. We were preparing for the show and there was this last week of rehearsals, so everybody showed up. I remember, without telling anybody I went back to Palermo. I got on the first flight to Palermo one weekend because my friend was celebrating her birthday. On my way back to Rome, I found out I had been kicked off the show, kicked out of the society. I was actually the lead role; I was supposed to play Gomez. They found another person and just like that, immediately. I had to sit through the whole performance and watch the person they had found as my replacement play my role. One of those things you remember for the rest of your life.

After my first year, I worked as a resident assistant and then I moved out of housing.  I did three internships. One of them was with Israeli Embassy to the Holy See, then the Prime Minister’s Office Department of European Affairs, and then the last one was with Eurovision as a reporter.

My senior year was all about Student Government. I was always involved as a chief of staff. I think it was one year before I decided to run for student government president- that was my senior year. I was very happy to win. Definitely one of my proudest moments.

What did you tackle during your presidency?

We were able to reintroduce the public elections and have people vote for their choice of the person who is going to represent them. I really enjoyed it. We re-introduced the presidential debate.

During my last year, the news came out that our former prime minister was one of the trustees for John Cabot. I remember because I was just introduced as student government president.  I posted: “I hope you’re all on board with this but I’m going to ask officially President Pavoncello to have Prime Minister Conte at our commencement.” At first everyone was in agreeance because it would be an honor to have a prime minister who had been connected to JCU at our commencement. Although then of course Italian politics is messy, and the coalition didn’t make some people happy. In the end, Prime Minister Conte had to cancel and decided not to show because of pre-arranged meetings and all that. The whole year it was on-going conversation though.

One thing I want to say: our administration was very successful in getting people to talk, regardless of what the topic might have been. Some people might have agreed with it, some people may have not. I think we definitely got a lot of people to talk about the community.

What skills and experiences do you think that you’ve gained from just being a student at John Cabot and being in classes that pertain to your major or being involved with the clubs or curricular activities that helped you during your job?

You were hired in 2019, after graduation, what made you decide to pursue a job at JCU?

I didn’t see myself being hired and working as an admissions counselor. It never crossed my mind. I had done a couple of presentations during my open house events as a student. I had been involved with the Admissions Office and I know at graduation I was hearing some rumors, perhaps people might be interested in me and they would like to keep me as an admissions counselor working at JCU. So, I just started doing some interviews, started talking to heads of departments. Then I committed to the International Admissions Office.

My job was, at least before the pandemic, all about traveling. I did travel for my first year for some weeks. I was in Rome for two to three days before I’d have to leave for another country so that’s something that very, very few university students, especially fresh graduates, get to do right after the graduation so I decided to take advantage of that opportunity.

My options were very flexible, very open. I decided to go into education and I’m now planning on pursuing a graduate program in Higher Education Administration.

What is your favorite thing about working at JCU?

Was your job everything that you expected it to be was there any surprises, any letdowns, any pleasant surprises?

I guess I’ll say I didn’t expect the job, the traveling to be so difficult because it requires a lot of energy.  I really cannot complain, if anything I should be nothing but he happy and very thankful for all this.

Was there a letdown? COVID. The lockdown began in March. I was supposed to go to Brazil, Argentina, and Paraguay. I was supposed to spend a whole month in Southern California in April, and it would have been an amazing, life-changing experience. However, because of what happened, I know each and every one of us had plans that were just affected because of COVID so we’re on the same boat.

Fairs: when I attended high schools,  are something I really miss- the energy, the nerves, the feeling nervous before you get to meet hundreds of people and not stop talking for three to four hours straight – requires a lot of energy definitely.

What does a typical day in your life look like without COVID? How has your job changed?

My job has been revolutionized, completely different than my original position. I’ve had to go from a job where my office was the airport, from traveling to one country to another, from being in Rome for two days to an everyday 9-to-5 job. You can imagine how different that is.  I haven’t been abroad since February last year.

The new strategy of addressing high schools and reaching out to potential students is through virtual. It’s all been virtual fairs on virtual platforms, ZOOM presentations even with other universities.

Would you recommend working at JCU to other JCU alumni?

Yes, one thing I’ll say is a piece of advice. JCU is comfortable because it feels like home. These are the people we’ve always seen for years and we’ve gotten to talk to for years and it’s comfortable. I always say that staying at JCU is amazing, but even the heads of each and every office or department tell you, “This is great, we want you to get a job once you graduate but then spread your wings because there’s a world out there, there’s so many things, there’s endless potential.” We can always come back to our JCU. I see it as a “mum,” a very protective mom, a very protective institution. There will always be a place for JCU.